If you aren’t watching Ted Lasso on Apple TV, you are really missing out! This show has so much heart, optimism, and belly-laughing humor. It’s winning all the awards and I see great parallels between the show’s lessons and work lessons on how you can be a better manager and coach. (Contains Spoilers!)

In season one we meet Ted Lasso, a Kansas High School Football coach, starting his new career as Head Coach of an English Football team. He has zero experience with the rules, strategy, and terms used in the game. He should be completely out of his element but he persists with kindness, positivity, and a lightning-fast wit filled with pop culture references and unending optimism.

Every episode gives you “the feels” and some excellent life lessons. This is one of those shows that justifies the amount of time I spend watching TV! So, here we go! 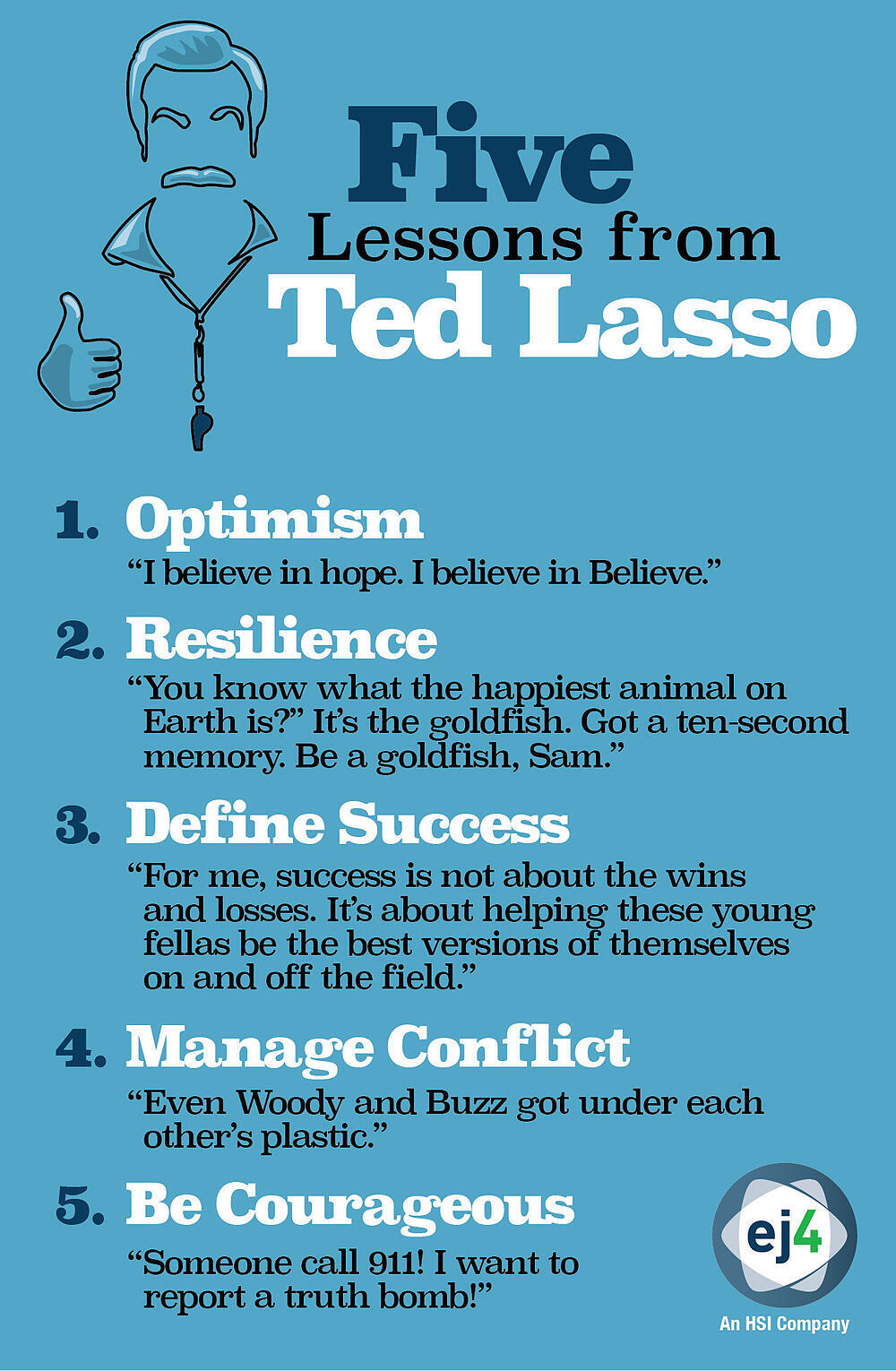 In his locker room, Ted posts a homemade poster that says “Believe.” That is a big part of leadership but we need to look at it a few different ways.

Ted says this to Sam after hotshot teammate Jamie Tartt hurts Sam’s feelings. He’s trying to get Sam to forget the slight, get out of his head, and move forward. The metaphor is great and motivational. Quickly, it spreads through the rest of the team to encourage them to take risks, not dwell on the past, not let their past failures dictate their future, and move forward.

This message of resilience is important for leaders everywhere. We all need to support our teams and their mental wellness as we continue working through the challenges of the pandemic. You can be a better manager if you have a higher level of empathy and emotional intelligence. Your employees are paying attention to your actions and how you adapt and respond.

Of course, in business, some key success metrics tie to sales, revenue, and profit, or in the case of Ted Lasso, the goal is also to win games. A coach is only as successful as their team. If your team wins, you win. If your team loses, you don’t blame your team. Set SMART goals so you can meet those business metrics. Also, offer your team opportunities for growth and development with training.

Ted takes a special interest in his clubhouse attendant Nate, who he nicknames “Nate the Great.” We learn that Nate has been bullied in school and has a hard time proving his worth to his own father. Ted looks for moments to build Nate’s confidence and allows him to contribute as a coach. There is a hilarious scene where Nate roasts the entire team and the season ends with Nate’s promotion to assistant coach. Ted has us all rooting for Nate!

To help your team be the best versions of themselves “on and off the field” or in and out of your workplace, you might consider a whole-person approach to training.

A common challenge for coaches and managers is helping everyone to not just get along, but also to gel and thrive. Ted has two marquee players who are disrupting the team’s progress and have divided the locker room with their antagonistic relationship. He “Parent Traps” them at a charity auction in an effort to get them to see eye-to-eye.

His lessons in managing conflict involve finding mutual respect and common ground. These apply to any team. Ted acknowledged the conflict, and rather than dwell on the negativity, he chose to address it head-on with empathy and humor. In real life, managers may address the challenges in the diversity of team members: differences from the perspective of a rookie or a veteran, or differences with team members from different backgrounds or countries.

In this scene, Ted is talking with Higgins about what it takes for a successful marriage. “If you're with the right person, even the hard times are easy.” I think the real-life lesson here comes from both Ted and Higgins. First, from Higgins, it’s important to find the right person. Translate this to recruiting top talent for your team. Second, from Ted, be courageous and tell the truth.

Successful leaders demonstrate managerial courage. This might involve having a difficult conversation with an employee about their weaknesses or mistakes. It may involve giving negative feedback with empathy and tact. Successful coaches have honesty and integrity and the courage to do and say the hard things.

Training Topics to Help You Become a Better Manager and Coach

When you work with a company like HSI and ej4 and use our Business Skills library, you could easily create a fun and engaging curriculum for managers with a Ted Lasso spin. Here are a few of our courses you could include along with the quotes above.