“[T]he Director of the Office of Management and Budget to present the President with a plan that recommends ways to reorganize the executive branch and eliminate unnecessary agencies.”

According to an article at whitehouse.gov, the public is invited to offer feedback on such reorganization efforts by June 12, 2017.

Alexander Acosta, U.S. Secretary of Labor, has asked employers and workers around the country to share their input on changes they would like to see in the Department of Labor (DOL). Secretary Acosta recently posted a tweet on the subject: 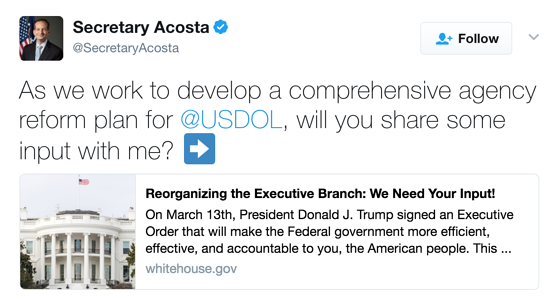 OSHA, the Bureau of Labor Statistics, MSHA, the Office of the Inspector General; all these agencies and bureaus fall under the aegis of the DOL. U.S. companies that interact with, or are regulated by, these groups have a unique opportunity to offer feedback and ideas on how such agencies might be improved to better support labor and industry.

No matter what your personal feedback might be, no one can deny the important role that regulations, and the governing bodies that issue them, play in protecting worker safety and wellbeing. OSHA’s Commonly Used Statistics page shares data on the potential dangers of the workplace, as well as trends in workplace safety over time, such as:

As we think together as a nation about the roles the federal government plays in our everyday working lives, those that keep our employees, our customers and our communities safe will always be a top priority for any EH&S professional. We hope you will lend your voice to the conversation.