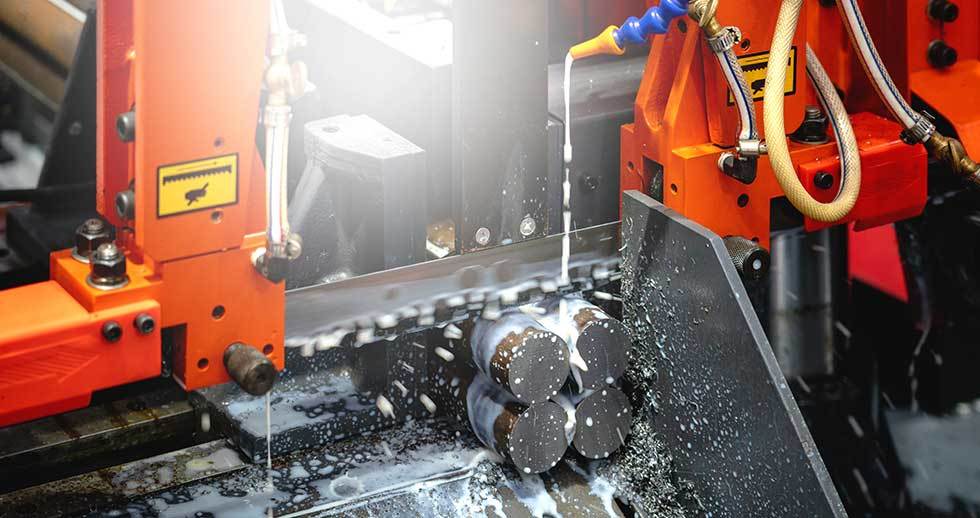 Here we have a metal cutting bandsaw used in its horizontal position. There are a couple of things with machine guarding on a bandsaw that we need to be mindful of.

First of all a term to teach you. The portion of the blade that's doing the actual cutting of the stock is called the point of operation. And so everything outside of the point of operation is to be guarded so that employees can't get caught by the blade or cut into any other moving parts. So this particular bandsaw is lacking its guard for the blade so often what you'd see is an adjustable blade guard that sometimes is made out of something that might look like a piece of angle iron like this, except for a much longer and it would be on both ends of what's called the unused run of the blade. And so the guard itself would go over this part of the blade but it would be adjustable so every time you change thickness of the stock that you're that you're cutting you could adjust the guard down so you're only exposing the put part of the blade that needs to be used to make the cut.

The other part of guarding on a bandsaw to watch out for is guarding the pulleys and the rest of the blade on either end of the bandsaw. This particular bandsaw has some guarding, but not all that it needs. So you can see that the openings here expose employees to moving parts when this saw would be operating, and someone could get caught in here and pulled into the into the pulley mechanism. So one way to guard that would be to use something called expanded metal, and so maybe you have an operator who's saying "yeah but we don't want to put a guard on this because I need to do some oiling or I need to be able to see in there to make do some adjustments". Try and expanded metal guard and you could even paint it flat black, I'm told that it's easier to look into if employees need to be monitoring how it's working on the inside it's easier to look into.

So those are a couple of things to know about guarding a bandsaw. So remember we only want to expose the point of operation on the blade itself everything else is to be guarded and include an adjustable blade guard on either end that also keeps the guide rolls in closed so we can't get pulled into those and then completely enclosed both ends of the bandsaw.

I hope you gained a safety skill today. If you know someone who needs this go ahead and pass it on.