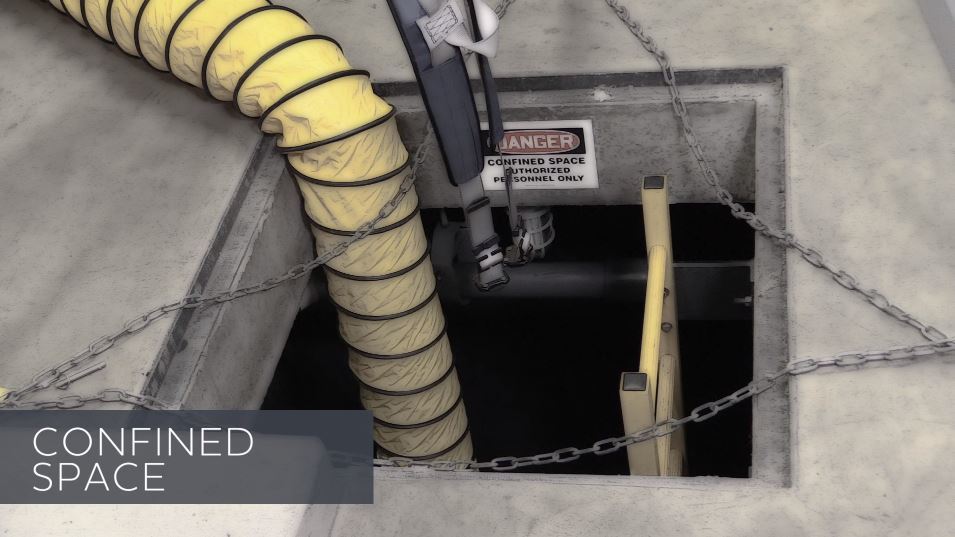 For this series, we are at the beautiful Monterey Bay Aquarium to show you that no matter where you work, safety training is for everyone.

Do you have any confined spaces in your work environment? First, let's talk about what a confined space is. A confined space is an area that an employee can enter with either all or part of their body but it's not intended for continuous human occupancy and it has limited means for entry and exit. Some confined spaces can include things like tanks, vessels, silos, storage bins, hoppers, vaults, pits like the one that I'm standing next to, now, sewers, tunnels, ductwork, and even equipment housing.

Once you determine if you have confined spaces you need to determine if they are considered permit-required spaces. A permit-required confined space has one or more of the following characteristics; it contains or has the potential to have contained a hazardous atmosphere, it contains material that has the potential to engulf an entrant like water or grain or sip has walls that converge inward, or floors that sloped downward and taper into a smaller area which could trap or asphyxiate a person, and finally contains other safety or health hazards such as unguarded machinery exposed live wires or heat stress.

Joining me at this confined space at the Monterey Bay Aquarium is the safety manager Jeremiah. Now Jeremiah when we look at confined spaces you know there are a couple different ways to think about it. We have confined space rescue and we have the actual permit-required confined space.

So for instance this backboard to my right is a really handy tool for actually pulling someone out of a hole. We're not gonna cease finding somebody or anything like that but we use it as a tool almost like a shoehorn to pull somebody out of a hole so they don't injure themselves when we're removing on them so that would be an entry rescue scenario. So that means that we would have to someone be working down in the pit if something happened we got a call on the radio we would have to initiate a rescue response. So we would have rescue personnel who are training combined space entry don a fall protection harness as well and go down position an individual get them in the appropriate position so that we could safely lift them with this retrieval device. So this is part of the rescue equipment we have the retrieval device that also has fall protection built into it so those are all part of rescue types.

Sure. So we want to plan for the worst to happen hope that it doesn't and we don't want to have to go scrambling for all this equipment first, so the goal is to have all this in place and ready to go. Should you need this right it's really important to have it when you need it because you don't have time to go get it later.

Now for the entry procedures so what sort of equipment do we have here just to be able to get into a space? So I mentioned first of all the tripod itself, it's a rescue device but it also serves as fall protection, it's dual purpose so if we were going to enter this pit say I was going in and you were the attendant, you were gonna watch the space. We put the fall protection harness on, would hook in and then I would actually be able to safely climb down the ladder. Now depending on the work I was doing I may unhook in if I unhook that would make this a rescue entry in a scenario where you had to come get me they add a heart attack or something like that you'd have to send someone in to come get me they'd have to hook me up. If I didn't unhook then it could be a non entry rescue you could actually just reel me in with the with the whip. Right.

Some of the other things that we've got here is a blower you can see that's to help clear out any air contaminants that could be methane it could be h2s. Think of a wastewater plant or something like that. Or it could just be insufficient oxygen so we run a blower to keep the air nice and clean and fresh and then if you look down at my feet actually we have a continuous gas monitor, so we'll monitor at different areas in the pit that'll tell us how much oxygen is available. You need to monitor this continuously so in the event that something changes in the atmosphere so you were welding down there and there was an open flame and you started to consume oxygen you'd want to be able to tell so this would tell us that immediately and then we could initiate a rescue and get the person out of the hole safely. Other than that if you can set these types of things up have them on-site you're definitely going to have a safe entry.

Sure and so if you if you've identified your rescue system and the hazards that were talking about and you have the process in place how are you going to remember it all and maybe that's what you want to talk about? Right right so everyone should have a solid confined space permit even if it's a non permit situation using the permit will help you remember all of these details and what's great about is it lays out the roles and responsibilities. There's supervisors, there's attendants there's entrants, themselves everyone has a role even the rescue team and what's great about a permit is it gives you a plan you can draw a picture on the back of the space you can tell where you're going to monitor and then if something does go wrong you always have a record of what you did right and you can go back and review maybe what your opportunities were as well.

Right this is a very important piece and as a as a former OSHA investigator. When I would do my inspections than I would ask to see the written permits and if I would see a lines written in these that someone wasn't actively using the form and they were just making a big line through everything. It was an indication to me that they weren't actually participating and noting everything and taking their time to do it maybe they were just checking a box to say that they had done it on paper which really puts people at risk not to really be thinking about the hazards that they could be exposed to on a particular day.

Jeremih thank you so much for sharing all this valuable information with us this is really impressive the way that the way that you handle safety here at the aquarium. Right.

And I would say the confined space procedure really does save lives. I hope you gained a safety training skill today.

If you know someone who needs this go ahead and pass it on.