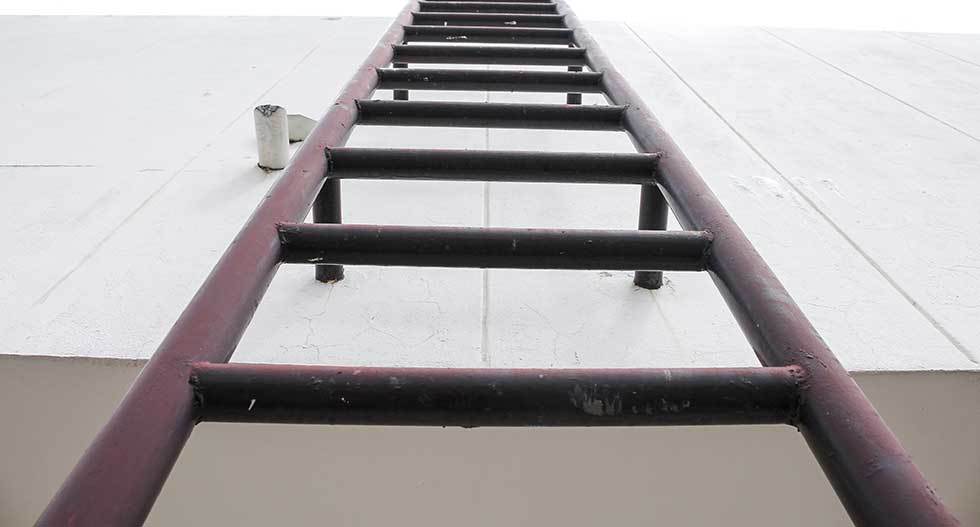 For this series we're at the University of Louisville in beautiful Kentucky to show you no matter where you work, safety training is for everyone.

Have you ever heard the term fixed ladder and wondered what that meant? Well it doesn't mean that the ladder was broken and is now repaired, rather it means that the ladder is fixed in place which is what we have here. A ladder that is fastened to the floor and it's fixed in place meaning it's different than an extension ladder or a step ladder as an example. So when you're doing your safety inspections looking for hazards some of the things to be mindful of with fixed ladders is that we want to make sure that the rungs are uniformly spaced between which we have uniformity here these rungs are spaced at 12 inches. We wouldn't want to go any greater than 14 inches with the ladder. And then we also want to make sure that the side rails are in good condition to hold on to and that they're not bent or distorted in any way. And then we also want to make sure that we have enough distance for our feet, so when we're climbing a ladder we want to make sure we're not going to run into any obstruction that's going to cause our foot not to have enough room or to slide us off the ladder. And so the requirement is for at least 7 inches of clear space past the rung and we have plenty of room in this particular one.

Now once you're at the top and you're at your landing point you've gotten off the ladder you want to make sure there aren't any other fall hazards from where you just came from. And so at the top of this ladder at the landing platform we have what's called an open sided floor. And that's protected from falling by the guardrail system that's at the top, which in this case is made up of two chains. One acting at the top rail and one acting as a mid rail which is perfectly acceptable.

So keep those items in mind as you're inspecting your fixed ladders to make sure that they're constructed properly and they're safe for people to climb.

I hope you gained a safety training skill today. If you know someone who needs this go ahead and pass it on.