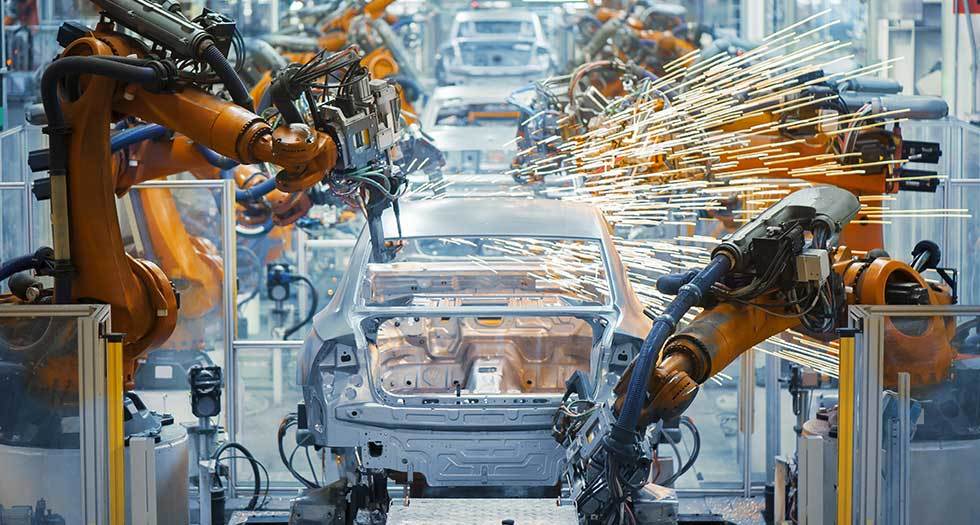 Join HSI Chief Safety Officer Jill James as she visits environmental health and safety professionals in their workplaces to explore important workplace safety topics. This video explores the benefits and dangers of using robots and robotics at work, including managing the energy sources and lockout/tagout procedures.

For this series, we're at the University of Louisville in beautiful Kentucky to show you no matter where you work safety is for everyone.

When was the last time you interacted with a robot? For me it was the last time I was in an automatic car wash for a friend of mine. It was when her husband had a robotic-assisted heart surgery. Robots are all around us we just don't often think about them. We have robotic welders and cutters. We have robots that are picking things and assembling items. They're everywhere and part of our life now, and today we're at the University of Louisville at their library with their robotic book retrieval system.

And with me today I have Alice Abbott Moore who is the robotic retrieval system supervisor. That sounds like a pretty important title Allison. Can you tell us a little bit about this system that you have here and what makes this library so unique? Well I thank you for being here today Jill, we developed the new wing group back in 2002 and was in response that we became an American research library and as a result of that we had to add 50 to 60 thousand new books every year. Well the older part of the library if you walk through it was just jammed up upstairs third and fourth floor packed to the gills and we had students studying in the stairwell, because we took away a lot of their comfortable studying space to accommodate shelving. Well it's a great honor that's one of the highest honors you can be the American research library world. So anyway our previous Dean Hannah O'Rater had seen a robotic system in one of her many travels. She was a huge proponent of information literacy and with that in mind when she saw one of these she came back to us and said we have you know we have a solution here's a possibility. We looked at compact shelving the university former part of the library we could not find their amount of space needed for that. Plus we have sub-basement so we couldn't excavate to do any compact shelving in that part so we chose a robotic system. With that in mind we looked at you know it's easier for our patrons to access materials and it's a faster turnaround as opposed to remote storage which is popular in a lot of library systems.

When the University of Louisville was you know begun we had no idea we would be this big today. So as a result we cannot really build out but we built up so we have an 8,000 square foot room here and it's three stories. We have a basement or a lower level here one with us one above us and with that in mind we have six seven thousand fifty two bins and we can hold up to 600 or soon to be about 600 thousand items. So each of these metal bins has books and other pieces of material in them that's correct we have books, journals, microfilm, microforms, CD, ROMs, VHS and older tech.

We have oversized books that was a great thing to get in here because I thought they were a danger upstairs on the third and fourth floor former patients pulling them off the shelves. We have government documents because we're depository here so we have a mixture of items in here. Items have stored by scanning barcodes and so everything has to be scanned in and scanned out and so you know right now you know we probably have I want to guess about four hundred and fifty thousand items and your give or take we're going through weeding and we also put things in so it's a constant flux. So it's the robots job to go and find the right bin for the piece of material that someone wants and to bring it back here to this area called the picking station where people from the library will actually take the document to be able to give to the patron who's asking for it, correct? That is correct.

All right and so robots come in lots of different sizes and configurations and I believe this type of robot is called a gantry robot based on the way that it operates and they do lots of different movements can you describe the movement that this robot makes to be able to do its work. Well this particular crane right here has two motors one goes up and one goes to side so it vertical and then horizontal so it moves in them almost like a grid-like situation there's a track on the very bottom of the floor and there's also a track upstairs on the very top rail. With that in mind it runs back and forth and up and down. Okay and then it pulls the the bins out. Yeah it has these two fingers here on either side and we call them fingers and they on these chains and they pull the l-brackets off of each bin onto the carriage.

Great and so there's a term that's often used with robotics and it's called the robotic cell and when you're in the robotic cell there's an opportunity for hazards there, so what kind of hazards does this robotic cell pose? Well one is, you know, crushing you know as soon as you come in this room this is a robotic cell for our situation here so you could have crushing, you have electrical, you have other hazards there as well. Yeah and so robots can move without notice because they get essentially programmed by whoever is asking for, in this case some product that they want to get out of the library and so they're kind of programming the robot if you will to make a movement to do a pick.

So robots are known to move without notice that's what a robot does what sort of safety feature does this robot have to ensure if something's going wrong that we can stop that robot? Well for one, I'm really particular who comes in here Okay. I try to train the faculty staff and students who happen to work in here and so we're all trained but also it is an open you know open system here we have e-stops here on each aisle on the left side so that's a that's our safety feature here on that and then also to be mindful and be cognizant as well as being have your ears and your eyes open.

Right so what about energy sources what sort of energy sources would we take into consideration with a lock out of this particular robot. What energy sources does it have? This system has 2 sources. Electrical, multiple electrical ways as well as gravity. Okay thank you. So one thing I would like people to be mindful of there is a requirement that says anytime you have a piece of equipment that has more than one energy source that you have written lockout/tagout procedures for each piece of equipment. And so for this particular situation it would be for both robots that you would have a written step-by-step procedure for both of them identifying all the energy sources which includes those multiple electrical sources that Alice was talking about as well as the fact that it has gravity and people often forget that gravity is really an energy source. And so if you think about it when this robot is at its highest point on the third floor that's a long way for something to fall should there be a failure.

And so part of the lockout/tagout procedure with this would be noting how do we're going to contain that energy source as well, which would mean bringing it down to its ground floor so doesn't have an opportunity to fall. And so with regard to the lockout tagout procedures all of those individual electrical sources, we'd want to find where it originated where its electricity originated and note that as the point for locking out the energy source so that there's no way possible it could ever start up accidentally or without notice. And so that means more than turning something off at a computer station it means going back to that original knife switch, that original breaker panel and applying the lock at that point. Then every year to update that written lock and tag procedure to make them sure nothing has changed if there's been an additional feature added to a component. Or maybe you have something new in the facility to make sure that hasn't added an energy source or something that we weren't thinking of before. And so write your lockout tagout procedures for each piece of equipment review them annually and always train your employees on exactly how to do a proper lockout/tagout procedure and identify who is authorized to do that lockout/tagout procedure.

Alice thank you so much for sharing this really unique system with us appreciate your time today. Oh, Thank You Jill because you've taught me something thank you.

I hope you gained a safety skill today. If you know someone who needs this go ahead and pass it on.