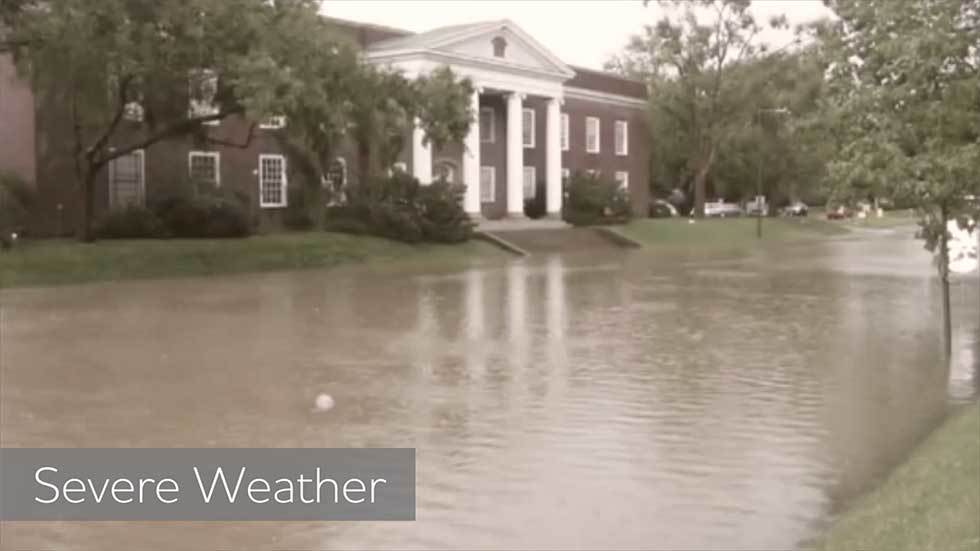 Hi, I'm Jill. Chief Safety Officer with HSI. I'm a former OSHA inspector, and I'm here to help you identify and correct workplace safety hazards. For this series we are at the University of Louisville in beautiful Kentucky to show you no matter where you work, safety is for everyone.

All employers are required to do emergency action planning. Now some people believe that only pertains to fire emergencies, but that's really not the case. Employers need to be thinking about any kind of emergency that can occur in their workplace. So that could be a hurricane or an earthquake, a violent incident, a chemical release, a flood, or even a tornado.

Here at the University of Louisville, they have first-hand experience with severe weather events, and with me today I have Dennis Sullivan, the assistant director of environmental health and safety and a certified emergency manager.

Dennis, can you talk with us about some of the weather events that have occurred on this campus? Well, this campus has suffered from several events that have affected our day to day operations. We've had two tornadoes that have hit our campus. One affected some dormitories at the north end of our campus. Luckily it was a weak tornado and it busted a lot of windows out and caused some car damage but it didn't do much structural damage to the buildings. And we had a second one on the south end of campus. It actually sucked the roof of a building right near our stadium.

So you know, we're not alone with tornadoes, every state in the nation has had a tornado. So it's nothing that anybody thinks it's not going to happen to them, eventually it will happen to them.

In 2009 we had a significant flood here on campus, it rained 8 inches in uh, an hour, and there were certain parts of the campus that had four or five feet of water inside and outside the buildings. That was a really difficult situation for us because we were just on the verge of opening up for the fall semester, and we couldn't move people in the dormitories and we couldn't provide services and we needed to have the classrooms available for them to go to class. So that was another one that, you know we had to withstand.

And then we'll have the typical winter weather where we'll have trees falling and ice storms and we've shut the university down a couple times for almost a week because of cold weather or the snow or ice.

Dennis, how has doing an emergency action plan help to get through those situations quickly and get things back up and running, in business. When a business or university understands the different disasters that can occur, they can plan for those emergency steps to protect life. That's the first thing. You want, you know we have 20,000 students on this campus so we want to protect all 20,000 students and the faculty and staff. Once you get through that initial phase where you're protecting life, then you have to look at the property end of it. So you want to take mitigation efforts to protect the property end of it, but you also want to be capable in the response to minimize the amount of damage that would occur on your campus or in your business, when the weather event does occur.

Can you talk about infrastructure changes that you have made to the campus to get you, to mitigate the loss, I guess, in the event of a weather event. Well let's take flooding for example, we put in retention basins at different locations on campus. Some of them are sub-surface and they draw off some of the ground water. That helps us keep the level of water we have on the ground as low as possible. That was a great effort. Another great effort that we had was to put new put new paving in that had the capability of water passing through instead of sitting on top of it. So instead of water hitting a street, running into a drain and filling up the sewer system, it was hitting the roadway, going through the roadway and into the ground water. Which is a better mitigation effort for that. Putting pumps in some locations so you can pump out basements more quickly. Raising emergency generators to different heights so they don't get flooded out during a disaster. All those things are things that we did after the flood of 2009. So some of.

Another piece of emergency action planning is alerting people to know what actions to take when a weather event is occurring, so what are those, sort of, alert systems that you had to do training, not only with the employees here on campus but with the students as well. What methods do you use? Well the first thing is we worked with the local government and the feds and we got granting funds to put weather radios in all our buildings and that was an important step. But we didn't leave it there, that's just one modality, we didn't want to have a single modality. We have outside warning sirens on the campus so that we can make a sound for tornado, or it also functions as a PA system so we can make an announcement over that system. We have VOIP phones that have in forecast which we are able to activate all the phones on campus at a single time to give an emergency message. So we have about seven different modalities we can use, but the ones we use most often are text messaging The VOIP phones and then the outdoor warning sirens.

And so how did you communicate the use of that with your staff so they knew what actions to take when you are determining, let's say its a tornado, how do they know where to go for their shelter. Well, actually federal law for collages and universities requires that you test your system and educate your population about your system annually. So every spring and every fall, we have an article we put in our newspaper. We offer individual training to different community groups on campus, and then we test our system to make sure that they know what it sounds like and what actions they are supposed to take.

And so if an employer is trying to figure out what kind of severe weather events in their work area, in their part of the country, what resources could they go to figure out what they should be preparing for if they don't know? Every area of the United States has an office of national weather service responsible for their particular location. They may not have an office in their city, But they will have one in close proximity that they can get information from. People at the national weather service have been great about working with us, we can get a history of severe weather over a 10, 20, 30 year period. We can see the types of damages that did occur with those weather events, we know we know about how often they occur, but it's not anything you can predict, you're not hitting it exactly, but you have some idea of what could be the potential for a flood or a hurricane. We even had a hurricane on campus. A hurricane or a tornado or whatever. That is the best thing that you can do to find out how often you might suffer from some type of severe weather.

And carrying that a step farther, you start looking at, okay, if I've had a severe weather event, what was the cost of recovery. And that's part of the driving cost of business. If you have insurance at your institution, if you're a federally declared disaster, some of that money is going to be recovered. In our flood, we recovered 22.2 million dollars. But still, there was money that wasn't recovered that we had to pay out of pocket for the recovery effort. Which made your planning all the more important. Right. Yeah.

Well Dennis, thanks so much for sharing your tips with us. The flood event that you all survived in 2009 and got back up and running in, what was it, how many weeks? Three weeks. Well, two and a half weeks. Two and a half weeks, that's pretty impressive when you had how many inches of rain? 8. 8 inches of rain. So if people are interested to see how you did that and got the business continuing, up and running, and the absolute benefit of having an emergency action plan, you have a YouTube video that kind of explains the entire process that people might be interested in as well.

Dennis thank you for sharing this information today as a certified emergency manager. If you'd like to hear more information about emergency action planning with regard to the University of Louisville and the great job that they did in 2009 you can search YouTube for FEMA University of Louisville and you'll be able to hear more about their story including all the important work they did for infrastructure planning and how they got back up and running so quickly.

I hope you gained a safety skill today. If you know someone who needs this, go ahead and pass it on.